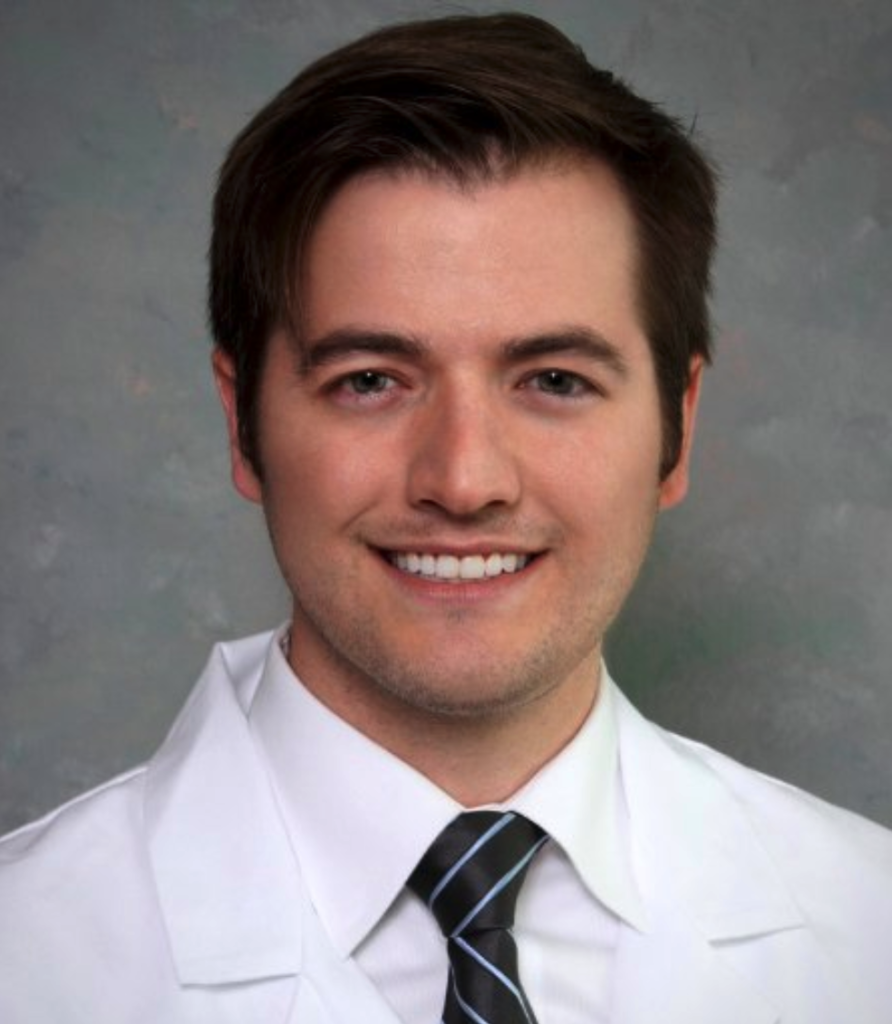 I was born in Hendersonville, TN, a town just north of Nashville. After considering engineering for my undergraduate degree, I decided to study biology with the goal of becoming a doctor instead. I was accepted to the Mayo Clinic for medical school, and was on track to complete a residency within radiation oncology upon graduating. It was at this point in my academic journey that I had my first encounter with Virtual Reality, which brought about an unexpected change in my career path. After that transformative experience, I decided to switch my focus to immersive therapeutics research, which brought me to Cedars-Sinai. After spending three years with their amazing team, I recently made the decision to return to residency to complete my medical training, which will bring me to Johns Hopkins for a new chapter over the next three years as a psychiatry resident.

What sparked your interest in VR/AR?

I’ve always had an interest in technology since I was young, but not until my time in medical school did it develop into something more substantial. I was given the opportunity to work with start-ups focused on web development for physicians, similar to a digital version of the Yellow Pages. Throughout my work with that project, alongside others not long afterward, I was exposed to the revolution in healthcare and technology that was beginning to take off at the time. I was excited to find that my interest in this aspect of medicine remained strong, given that I’d struggled to find my niche within the more traditional routes available to healthcare students up to that point. From then on, I began to seriously consider how I might be able to incorporate technology into my future work as a practitioner.

Things finally came together at a VR event I attended through Meetup.com, where I was able to have my first go at the Oculus Rift Developer’s Kit back in 2016. The first game I tried out placed a Tyrannosaurus Rex at the end of a long hallway and the player at the other, giving no other option than to watch it come bounding straight toward you. Although I was well aware that it was only a game, my subconsciousness couldn’t quite shake off the fear that comes with an entire T-Rex headed your way! I recall being so immersed in the moment that I felt as though I could sense the dinosaur’s breath as it came close. It was as though my imagination was thoroughly convinced and working to fill in the gaps on its own! It made for an incredible first experience, to say nothing of a lasting impression. I went home and began researching VR’s involvement in the medical world on PubMed, and was surprised to find over 1,000 papers from research dating back over two decades already. It was incredibly exciting to have found both a technical and creative outlet that could be applied to my studies in healthcare, and I’ve set my sights on VR research ever since.

Which of your professional accomplishments are you most excited about?

The work that I’ve been participating in at Cedars-Sinai under my previous boss, Brennan Spiegel, has definitely been some of the most exciting work in VR that I’ve taken in part in thus far. Before I came on board, he had been trailblazing the use of VR for the alleviation of pain with RCTs in the inpatient setting. I joined in right as he had started a clinical study on therapeutic VR in the patients home. This development would open up a world of possibilities for treatment, as digital interventions could begin to be prescribed and self-administered asynchronously in the comfort of one’s own home. By the time COVID had come around, we had been studying remote research for two years, which made our work all the more important in a time where telehealth and remote research became a critical form of communication. We are one of the few sites supported by the NIH’s HEAL initiative that has been able to continue researching to reduce pain and opiates, given that it can be administered remotely – something we are incredibly thankful for.

The progress we’ve seen so far, especially in a situation that put our work to the test, gives me much hope for the future of this medium going forward. Novel methods for asynchronous content aimed at mental health and pain reduction have recently become more accessible thanks to mobile apps, and our current work with VR serves to bring those benefits even further. It’s been incredible to be part of the process through constructing methods and building surveys for conducting future studies, and I’m very excited to learn about both future results and subsequent breakthroughs that this information can lead us toward in the future.

Picking only one is pretty tough! I’ll go with the top three on my laundry list, with a scenario to help bring them all together. Say that we have a patient struggling with multiple issues at once, such as relapse from addiction alongside a traumatic past experience. Although they may wish to receive professional treatment for these important needs, the stigma surrounding mental health may prevent them from taking the initiative to begin their journey toward healing. There could also be common environmental barriers to consider as well, such as issues surrounding transportation or inconvenient clinic locations. Thankfully, VR has the potential to address all of these needs at once. Consider the recent development of the social media platform VR Chat, where users can join a social network anonymously and interact with other players remotely. It would be incredible to see this concept used as a basis for administering therapy, providing both greater ease of accessibility alongside the option of anonymity for the patient. In addition, building a custom environment tailored toward a patient’s needs can be made easier than ever with the help of advancements in technology. Although building a convincing world is expensive and time-consuming in VR at the time, we’re already beginning to see incredible progress with the quality and speed at which this can now be done. I believe the day will come where a client can simply describe their memories for an AI to recreate, which is an area of research currently known as Precision VR. The patient would have the ability to interact with a world that holds deep personal meaning to make purposeful changes, which can then translate into real-world results. To sum it all up – anonymity, precision VR, and social VR! I’m excited to watch all three of these come together to make mental healthcare more effective and accessible in what I hope will be the near future.

Taking the matter of personal interaction a bit further, I’m also looking forward to technological advancements within embodiment therapy for treating patients. Embodiment therapy involves the action of a player taking “ownership” of a virtual humanoid avatar. This would include full body tracking, along with synchronous stimuli from auditory, visual, and haptic stimulation from the real world. There’s been a lot of great research from laboratories across the globe on the efficacy of this treatment, and the results so far have shown incredibly strong outcomes that persist up to six months past the intervention. As many recent developments in digital mental health treatment have the ability to be administered through various mediums, such as cell phones, embodiment therapy is an experience unique to VR. Although we’re quite some time away from receiving approval for such an involved method of remote research, it’s exciting to know that we’re heading in that direction as software advances and hardware becomes more sophisticated and affordable. It’ll be a wonderful era of AI PhDs and VR PhDs, along with many other disciplines, coming together to make something incredible to benefit humanity!

I think this would depend upon what direction a potential VR researcher might like to take as they work to build their career. For instance, if you feel passionately about the ability to personally administer treatment in a clinical setting, passing through the rigor of medical school and residency would be a requirement. However, If you instead prefer to have a greater hand in the development of trials, taking a more academic route with a PhD would be a better choice. If you find that you’re not inclined toward either of those options, however, there are still plenty of ways to become involved in the vast world of VR research. My advice in this case would be to work hard toward becoming proficient in a hard skill. For instance, get very comfortable with coding or find opportunities to gather experience with data science. Furthermore, there will be a need to develop some level of understanding with such skills in an effective team as it is. Although I’m mostly involved with the medical side of things, it’s still necessary to work hard at educating myself in these disciplines with the help of my teammates. As my role is that of a middleman responsible for bridging together statisticians and clinical trialists, the more I’m able to understand and “speak” their languages, the better it is for our team. Putting in the time and dedication to develop these skills is of utmost importance, especially since there aren’t any shortcuts when it comes to important topics such as these. All in all, knowing how you’d like to be involved and diving head first into that area of specialization is the key.

Becoming more experienced with the art of collaboration is also another important part of the picture to work on, no matter what discipline you’re coming from. No one is an expert at everything, and it’s inevitable that you’ll need quite a lot of help in any given research project. As part of the collaborative process, you’ll be tasked with finding people who know those different areas best. If you can find a champion – someone who puts great effort into their topic, works well with others, and expresses dedication to the cause – do everything you can to hold on to them! USC is a great place for finding such people, both at the ITC as well as the very multi-academic ecosystem that the university offers.

Anything you are passionate about, aside from AR/VR?

I’ve developed a big interest in the podcast and blog spheres throughout the pandemic, and I enjoy what effective mediums they are for learning. I’ve begun following a few in psychiatry in particular, as that’s the field I’ll be heading into for my residency. Ive decided to do my own podcast on the intersection of immersive technology and psychiatry. It is called “immersive psychiatry” and it will be on spotify, itunes, and google podcast. It would be much like what we’ve discussed here, but in greater detail. It’ll be a great pet project to look forward to in the future!