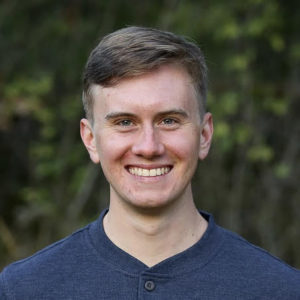 Garrett Flynn is an interdisciplinary senior at the University of Southern California, pursuing a BS in Computational Neuroscience, an Honors in Multimedia Scholarship, and an MA in Cinematic Arts (Media Arts, Games, and Health).

I was born and raised in Eau Claire, Wisconsin, leaving before my senior year in high school to pursue a B.S. in Computational Neuroscience at USC. I began undergraduate research at Hires Lab where we used optogenetics to understand the neural circuits underlying tactile sensation—though later transitioned to the USC Center for Neural Engineering (CNE) to work on their hippocampal prosthesis to restore memory function in dementia. While I initially worked on the prediction of memory content from recorded brain data, I put this project on hiatus to focus on the human-centered design of brain stimulation technologies. In collaboration with the Goering Lab at the University of Washington, this led to an NIH Administrative Supplement to gather the perspectives of patients implanted with hippocampal prostheses and individuals with low-level cognitive decline on cognitive brain stimulation.

Adjacent to these pursuits, I was also preparing for a capstone project for the Digital Studies minor at the School of Cinematic Arts. Supported by the Ahmanson Lab and the Sidney Harman Academy for Polymathic Study, I convened a student working group to create interactive media informed by real-time brain data. And as a silver lining to the COVID-19 pandemic, this eventually developed into Brains@Play: an international research collective organized with Marientina Gotsis, Dong Song, and Dimitris Grammenos to encourage the responsible design and development of multi-user brain-responsive experiences.

The biggest lesson of my interdisciplinary journey at USC was the real need for accessible neurotechnology media. As such, I decided to continue my education as an M.A. student in the Media Arts, Games, and Health program where I’m working on an open-source software library/platform for developing and distributing biosignal-responsive applications on web browsers.

What sparked your interest in AR/VR?

Early in my high school years, I had a chance encounter with Neuromancer: a well-known cyberpunk novel that features full-dive virtual reality accessed via neural implants. While I decided to pursue neuroscience rather than AR/VR, I’ve never lost touch with my fascination with the immersive virtual experiences described by this work of science fiction.

Which of your VR/AR accomplishments are you most excited about?

Surprise, I have yet to develop my first VR/AR application! Nonetheless, I’ll gladly acknowledge the four wonderful submissions we received for the VR + Neurotech + Health category of the 2021 Brains and Games International Design Fiction Competition, hosted by Brains@Play and sponsored by the USC SMART-VR Center (among many others). It was truly inspiring to see the passion that each team brought to the problem of designing future-looking VR applications that improve health outcomes for users by incorporating brain data.

On the other hand, I’ll be bringing the Brains@Play team in full force to the XR Brain Jam this month. So stay tuned.

At first glance, I’ve been very excited by ongoing commercial projects at the intersection of neurotechnology and AR/VR. OpenBCI, Tobii, and Valve recently announced a project to integrate a wide range of biometric sensing capabilities into the Galea headset. Additionally, Facebook is developing an EMG-based armband to control VR environments. Both of these projects highlight the increasing feasibility of incorporating biometric data into (even more) aspects of everyday lives. Even beyond privacy and security, however, these developments bring up ethical issues related to access. Who will be able to afford these technologies? And even if you can afford them, will they work for everyone?

In this sense, I’ll admit I’m most excited about efforts to reduce the barriers to participating in the current generation of AR/VR experiences—much less next-generation commercial devices that divert resources from broader access.

Actively seek out opportunities to work with people outside of your discipline. Having stumbled my way into countless interdisciplinary projects during my undergraduate years, I can truthfully say that each was an extremely rewarding and formative experience. In this vein, the most reliable way I’ve found to start making these connections is to reach out to people whose work interests you—even before you feel that you know enough to have an intelligent conversation! While I still get stuck in loops of procrastination for the sake of preparation, I’ve rarely had a negative experience meeting to chat about someone’s life work. As long as you’re willing to lean into new responsibilities, this first meeting is likely to grow into something beautiful that neither of you could’ve originally imagined!

Anything you are passionate about aside from AR/VR?

As I’m quite an obsessive person, I rarely engage with something unless I’m willing to put my heart and soul into it. Since March 2021, I’ve been focused on the creation of a browser-based brain-computer interface (BCI) system usable by anyone with a brain, including those with severe motor deficits as well as healthy end-users. With our two-person team working around the clock, we’ve received immense excitement from research groups working with pediatric populations with cerebral palsy and adults with amyotrophic lateral sclerosis. So it seems the work has only just begun.