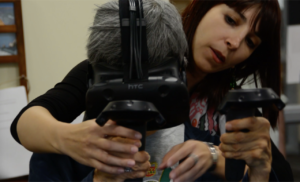 Marientina Gotsis earned her M.F.A. in Electronic Visualization at the University of Illinois at Chicago. Alongside her work as co-director of the SMART-VR center, she serves as founder of USC's Games for Health Initiative, as well as co-founder and director of the Creative Media & Behavioral Health Center at USC.

I was born in Chicago but raised in Athens, Greece in a semi-urban community in front of the airport. I was always interested in art, psychology and physiology for as long as I can remember, probably because I was a sickly and clumsy child. Sunsets at the airport were beautiful, but the pollution was likely detrimental to everyone who lived nearby. School was not very easy for me and I often felt that I had to try twice as hard as everyone else academically despite being a voracious reader. What was easy for me however, was working on anything technical and technology-based, analog or digital. I had a gift for fixing equipment, for doing research on the nascent BBS (pre-internet), and for solving people's problems, which financed studying at the university for eight years. Teaching was both natural and accidental for me. I tutored older people with how to use computers and creative software, taught at community college and at other art programs, and discovered that Ι loved teaching diverse people and was really interested in making technology accessible.

What sparked your interest in AR/VR?

I read an article about CAVEs and virtual reality in Time Magazine in the early 90s which described what was happening at the University of Illinois at Chicago. I was an impressionable teenager and declared that this is what I wanted to do. My parents were not happy about my interest to pursue art, but art and technology seemed more acceptable. Greek parents are quite traditional when it comes to professions: lawyer, doctor, engineer, etc. 'Artist' was (and partly still is) equated with either being chronically unemployed or living an anarchist lifestyle at the boundaries of what is socially acceptable. This stereotype endures today across our materialistic world. We fail to see the true value artists provide daily in our lives.

University of Illinois at Chicago created one of the most lasting interdisciplinary labs in the United States, combining artists, engineers, and computer scientists all under one roof. That lab, which is known as the Electronic Visualization Laboratory, was my home for eight years. I studied computer graphics and virtual reality long before it was hip and cheap. I also studied painting and drawing at the School of the Art Institute of Chicago for three semesters in parallel, but it was impossible to swing it all financially. The CAVE(tm) at the time used analog CRT displays and had a painterly and seductive quality that really won me over. The environment of an academic lab felt for me much more of a home than a gallery because Ι was quite passionate about research, and also applied work. My interests with VR began in virtual cultural heritage work and ended in mixed reality and movement-driven work.

Which of your VR/AR accomplishments are you most excited about?

Not that easy to choose. Excitement drives everything or it never happens...If I put aside my early work, all of which was new and fresh to me and felt exciting, I can say that I am very proud of the work we've done in my lab with the team behind Skyfarer, a mixed-reality game for individuals with spinal cord injury. Leading your own team, learning from so many different disciplines, working with patients, working with senior colleagues, working with your own data—it is all very humbling. That is exciting. And I was also excited to transfer some of that knowledge into our work with our team working on Parkinson's disease because it is something I wanted to do since my first year of college. Ι do some consulting work also, which has led to creating work with impact, either clinically or commercially.

I have been waiting for telehealth for 25 years in the United States. Having grown up in a medical system in Greece that supported home visits, I found it cruel to ask the sick and disabled to venture out of the home. I have been bedridden myself so often that I find it personally frustrating. We have so much technology available in our hands that can be deployed toward telehealth using VR and other supportive technologies. The pandemic proved that our bureaucracies could be bent toward a practical and compassionate future. That is what I look forward to.

I wrote an article in 2009 entitled Games, Virtual Reality and the Pursuit of Happiness. My advice was for people to collaborate and I also implied patience is needed, to watch ideas cycle many times until everyone understands it. It does not matter if you’re the only person who sees something. It matters to keep working until everyone is on the same page. And in doing so, your own vision has to be reshaped to incorporate the perspective of others. I am very aggressive with my ideas, but I will always listen to other people’s ideas and back-off as needed. Patience and persistence have to accompany a strong will. Listening, borrowing, giving it back. Learn this dance!

Anything you are passionate about aside from AR/VR?

Cooking is what I do for fun. I take pleasure in the rituals of a kitchen. The time that I am hovering over a stove making something I learned from my grandmother, I am both her and me and she is very much alive again. It may seem sentimental, but VR has helped me appreciate those subtle things in life much more. When you have to design and manufacture “presence”, you pay attention to the invisible and the mundane embodied aspects of life with much greater precision.

For more information on Marientina Gotsis's work, visit her profile at the USC Cinematic Arts School. You can also follow her on Twitter at @marientina.